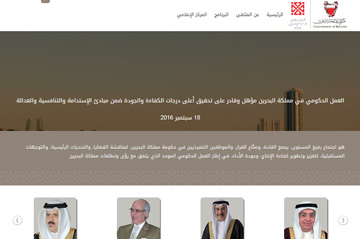 Manama, Sep. 15 (BNA): The official website of the Government Forum 2016 was launched yesterday. The forum will be held on September 18 in Shaikh Isa Cultural Hall under the patronage of His Royal Highness Prime Minister Prince Khalifa bin Salman Al Khalifa and in the presence of His Royal Highness Prince Salman bin Hamad Al Khalifa, Crown Prince, Deputy Supreme Commander and First Deputy Premier. Chief Executive of the Informatics and eGovernment Authority Mohammed Ali Al Qaed described the authority's participation in creating the website as an honour given the importance of the forum which brings together ministers, assistant undersecretaries and directors from all ministries and government institutions. He pointed out that the authority had created the website and developed it in a comprehensive way, adding that work is still on to update it and post daily information about the forum. The website sheds light on the goals of the forum in boosting the role of the public sector and developing its output while taking into consideration development changes and requirements. The website (GovernmentForum.bh ) also presents an insight into the forum which is considered as a high profile meeting that brings together leaders, decision makers and executive officials in the Bahraini government to discuss issues, main challenges and future trends to improve productivity and performance.