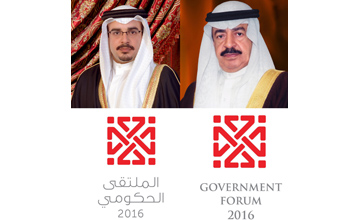 Crown Prince and First Deputy Prime Minister, His Royal Highness Prince Salman bin Hamad Al Khalifa, today announced the launch of a national Government Forum that will take place on September 18, and which will be centered around the Kingdom’s continued efforts to deliver a modern and dynamic public sector that can facilitate long-term prosperity through private sector growth and provide public services that meet citizens’ needs and aspirations. The Government Forum 2016, which will be the first of its kind in the Kingdom, will bring together ministers and officials from across government to explore ways in which even greater sustainable diversification and economic prosperity can be delivered. The Crown Prince noted that enhanced government collaboration and internal coordination will be crucial to helping Bahrain adjust to rapid global and regional socio-economic changes, saying that the newly-launched Government Forum will facilitate interaction and the exchange of new ideas across all levels of government. The Crown Prince highlighted that His Majesty King Hamad’s directives and leadership have and continue to inform every aspect of Bahrain’s long-term development, whilst noting that the forum, which will be held under the patronage of the Prime Minister, His Royal Highness Prince Khalifa bin Salman Al Khalifa, underscores his commitment to advancing sustainable diversification efforts.